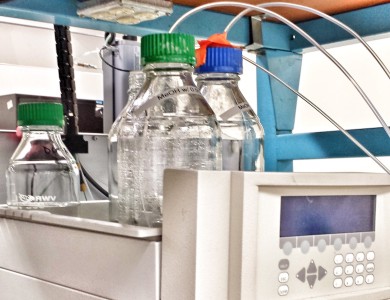 “We are delighted that the first recipient of the Averica Award is Bill Farrell, who with his team at Pfizer has been central in helping to make SFC such a powerful technology,” noted Dr. Kiplinger. “Bill has had a substantial impact on the design of preparative SFC systems, including his critical contributions to stationary phase development, and he has played a major influential role at relevant scientific meetings. At Averica Discovery, we rely on preparative SFC to provide our customers a scalable approach to chromatographic isolation on an accelerated timescale, giving us the opportunity to appreciate Bill’s contributions to the field daily.”

SFC is used for the analysis and purification of low to moderate molecular weight molecules and for chiral separations. Carbon dioxide-based SFC achieves high resolution, yet is faster and more efficient than liquid-based HPLC. Importantly, SFC eliminates the need for organic chemical solvents and recycles CO2, making it an environmentally conscious, “greener” alternative. The increasingly prominent role of SFC technology is evidenced by the fact that the number of SFC-related articles in chromatography journals has risen 4-5 fold over the past decade.

Mr. Farrell commented, “This is really an honor. I’ve been lucky to work with colleagues and collaborators who contributed a passion for science and chromatography to many different projects, and I’m especially grateful that the body of our work is being recognized as a whole.”  As part of the Averica Award, Mr. Farrell received an honorarium and will deliver a keynote presentation at the SFC 2013 conference today.

*Addendum – Bill Farrell was the sole recipient, as the award was discontinued the following year.