Why Thalidomide Is Important to Chiral Separation 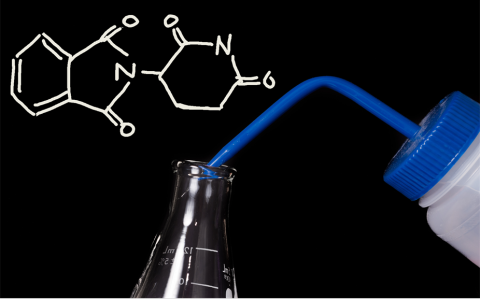 Contergen (thalidomide) was launched by the German pharmaceutical company Chemie Grünenthal in 1957. It was prescribed as a sedative and hypnotic, but was used for nausea and gastritis as well. When it was approved for over the counter sale in late 1957, it became popular for relief of morning sickness in pregnant women. Between 1957 and 1961, 10,000 infants exposed to the drug in utero were born with catastrophic limb malformation called phocomelia. Only half of the infants survived.

During this time, drugs were not tested for teratogenicity – the potential to harm or cause abnormalities in a developing fetus. The thalidomide disaster led to the development of more structured drug regulations and control over drug use and development.

Thalidomide is chiral, and the Contergen was a racemic mixture: equal amounts of the (R)- and (S)-enantiomers. The two enantiomers cause distinctly different effects from one another, and it is thought that only one is the teratogen. Efforts to develop a stable, single-enantiomer thalidomide – with no teratogenic activity – focused great attention on chiral drugs at the time.

Unfortunately dosing a single enantiomer of thalidomide doesn’t have a unique therapeutic value, because the drug converts to the racemic compound in vivo. However, the extensive study of thalidomide and its mechanism of action has led to a number of analogues that have value clinically. The Celgene drugs lenalidamide (Revlimid) and pomalidomide for blood cancers and immune disorders are probably the best known.  Celgene also sells thalidomide as a treatment for multiple myeloma and complications of leprosy under the names: Immunoprin, Talidex, Talizer or Thalomid.